I was told that I did a pretty brave thing of leaving a job that made me miserable.
I am also considered brave to be 'open' about what I think in social media. My thoughts on religion and the likes can be, almost blasphemous.
However, because I am Malaysian, of both Malay and Chinese heritage, I understand the meaning of tolerance deeper than most.
I am also brave on wearing yoga leggings and sports bra for yoga selfies. 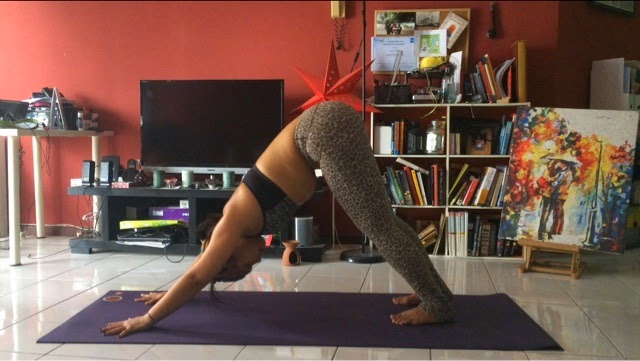 Well, consider this, if my body had not changed over the years, I don't think I would be brave to do this now.
Even now, I still have issues with my body. At 35, I am slowly defeated by gravity.
And at 35, I still do wonder what the hell is it that I am actually good at. Most of the things I did, had been more of a 'throw me in and see if I come out in one piece' kind of thing.
The free time that I am reluctantly having, gave me a lot of time to think.
The conclusion is this, I am pretty good at insisting on doing what makes me happy.
Considering that so many people are defeated by the needs that they abandon their happiness, that is a skill on its own.
I will (hopefully) be blogging come new year's (haven't you heard, blogging is kind of... Dead). Until then, keep afloat and someday you will fly.
Namaste.
Posted by Sarclover at 12:07 PM 3 comments:

That was the question I asked N the last time he was here. It had been a week after the last day of my job. I have been off the schedule and was feeling... for the first time in a long time, free.

Sure, I will have to go back to working soon, but, I am just glad that I am no longer with the company I am with anymore.

I don't know what was it about the job, something was off. I can't put my finger on what. I have been analyzing it. Perhaps it was the owner, perhaps it was my scorecard, perhaps I was not made to depend on another team run by other people but myself.

Perhaps I am just not good enough.

N told me that there will be times when the job just will not suit a person. When that happens, there will just be a couple of things one can do. Stay or leave.

"And when you leave, it is either you want to take a break, and then find a job, or you want to start another job right away. Don't over complicate how you see things. It will drive you crazy if you do."

I was able to do a lot of things since I quit my job. Even though I have to think twice about buying anything now, I feel happier than before.

So what does that mean?

Somehow I made the right decision.

I am taking on several proof reading projects for now, also seeking working from home part time positions from some people I know around.

I won't keep on being in between jobs, that's for sure, and to be honest, I don't know what's in the stars for me after this.