I guess, minimalism does just... creep up to you.

For a person who used to spend 300 bucks per week, I am now spending way lesser than that on a weekly basis.

I used to be a spendthrift, especially when it comes to clothes and pretty things.

I did write 2/4 entries before this on my frugality attempt. The attempt, failed.

However, after 'the incident', I didn't see the need for me to spend, to buy things, be it for myself or others. I sort of lost the will to be who I was after that. It took a lot of inner will to keep going, to wake up and to go on like normal.

Aside from my rent, groceries, bills and my Yoga class fees, I have little need to spend for anything else.

Sometimes I would stroll into a shoe shop, and instead of coming out with 2-3 pairs of shoes, I would be walking out with two free hands.

I still love shoes, but my priorities in life are different now. My job does not require me to dress up, and I wear flats all the time to office. I love designer labels, but I don't have a need to buy them if I can't afford them, I still love window shopping, but I would be thinking twice about buying anything.

For an example, I was looking at a pair of high heels a few days ago. It was on 70% sale. It was gorgeous. It will make my legs and butt look awesome.

But, come on, who am I kidding here. I can be sitting somewhere in a pub at a bar wearing the most risque looking negligee and no one will approach me. so I am no longer interested to make an effort. I know, guys who would like women for who they are, are hard to come by, but hey... at 35 (I always add another year to my actual age) I think I am allowed to not just settle.

I am not going to hardcore bat shit crazy about minimalism, but, for now, minimal is the way to go.

Just like how I love yoga to death, I am not about to join a cult of piss drinking yogis just because it's the in thing to do.

Do everything in moderation I say.

Posted by Sarclover at 10:51 AM No comments:

Why life should be better than it really is.

Little things give you something to live for.

It can be the irrational crush I have on my Yoga teacher, my insanely quiet life compared to whatever hell I had 10 years ago or that great red latte I always drink with pure gusto after my yoga classes. 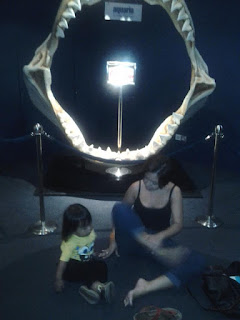 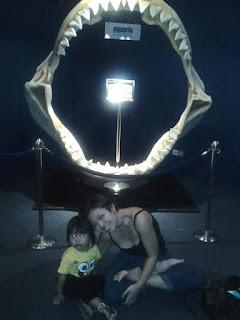 Things like teaching my nephew how to sit in lotus in front of a pre-historic shark's jaw. 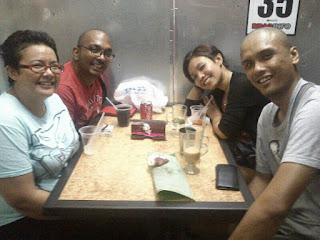 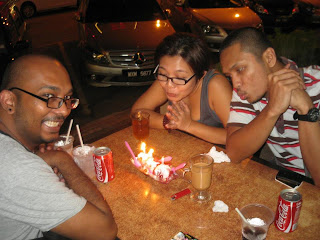 ... like the fact that two of my closest friends are fellow Aquarians and celebrating our birthdays with banana split sundae at the Mamak. 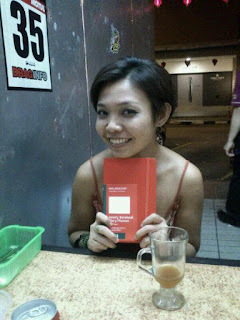 ..like how two of my closest friends nailed what I want for my birthday with a Moleskine notebook for yours truly.

And also how amazingly chiseled my shoulders look  from this angle. :P...

I guess I should give my life a break.

Ayu
Posted by Sarclover at 10:54 AM No comments:

My birthday was a very small affair.

It always had been. I stopped getting birthday presents when I was in my tweens I think. I can't really remember getting any from there onwards.

My birthday was mostly forgotten. That might be the other reason why I don't have the need to remember other people's birthdays.

The only people who would remember would be my best and some close friends and colleagues and now, thanks to Facebook, a dozen other people who are nice enough to drop a birthday wish.

Last year, I spent my birthday with T. He called and checked what was I doing for my birthday. When I said nothing, he said no one should be alone on their birthday, and had me stay with him for a couple of days. He made me breakfast, and treated me to dinner.

I spent my birthday this year, attempting a headstand pose, and a couple of ciders at a small pub.

I was on my own, not wanting to impose on any of my friends who would either be working or having other affairs on the second day of Chinese New Year.

I missed T, and missed him even more on that day. If there is one thing that I will always remember about him, would be his kindness. He is not the most loyal of guys I knew, but, being that we were in an open relationship, I guess, I shouldn't be expecting any of that loyal crap from him.

But he was there, when I needed him. And I loved him.

Happy 34th birthday to me. I will be lonelier, and I think I will be able to cope with it better than the past years.

My life, my rules

Recently, I was invited to a good friend's birthday do.

Except for the birthday boy, I don't know anyone else in the group.

I guess, I was one of the youngest in the group.

And in any social situation where you don't know anyone else, you keep the person you know, close.

Of course, I was mingling with the new people at the table, although not so flamboyantly trying to make my presence heard/seen.

As it happened, I got into a whimsical 'free-style' conversation with one of the guys I was seated next to. A retired pilot, who is still single, and Scot (Don't ask).

My friend texted me with a cheeky :

'*Robert has never been in love.'

Well, the thing is... neither have I, actually.

See, I am not sure if I have ever been, 'properly' in love before. I don't think I am going to actually get a chance to.

Even if I am in love, then it would be with something like my Yoga practice.

But organically, with a male human being?

*Robert and I talked throughout the night, with occasional pauses in between when the other ex-pilot bloke came over to speak to him.

He asked me if I have ever been married (The majority of the ladies there are either married/had been married). I said no. I told him that I repel men. I am no good at this dating and flirting thing.

Like all of my guy friends, he started giving me some pearls of wisdom about dating and flirting. I said, dryly, that I am just, not ever going to be good. I am not a head turner and I hardly even bothered to smile to strangers.

'Well, even when you are smiling, you have this unavailable vibe.' Robert said to me.

That interested me, that piece of observation by a stranger I have only known for the past 1 hour or so.

Well, maybe I was. Maybe, I am just... tired of being available.

At the end of the night, we exchanged numbers and Robert said he will give me a call sometime. I shrugged and nodded.

I didn't really... care, to be honest. Whether he is going to call me or not, is something quite insignificant. Although, like any Scot I know, he was a charming, well-spoken, very together man.

I guess, the piece of rule I am now living by is a personal subconscious choice.

I am going with the flow, come what may, devil may care. 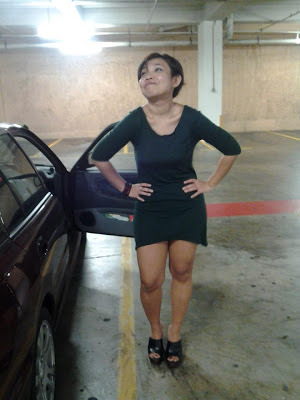 Often we forget our limitations.

As a human being, I was both frustrated and at times, arrogant, on the mat.

I would watch in envy as a fellow yogi attempted a perfect Tittibhasana when I can barely lift my feet off the mat. I would also sometimes gloat quietly when I see someone else struggling with a wide legged forward bend, which is something I can do in a heartbeat.

The truth is, there is no room for arrogance or frustration on the mat. The practice makes us look at ourselves and for us to acknowledge our current limitations, and to also power us through those limitations, to be better.

Most importantly, to realize that all those are only possible with patience.... and humility.