Yes. I am picky that way

My sister, bless her heart, tried to hook me up with a guy, recently.

The guy is a widower, an engineer.

I casually told her that I am not interested.

"I am not interested in Malays. Or Malaysians. Only Mat Salehs."

I said, ever so crudely.

Coming from someone who had always been a rebel in the family, this shouldn't 'shock' my parents.

Hey, listen... I tried. I tried dating local men before. I failed, miserably.

I don't think a bikini donning, yoga mat toting 34 YO is the local men's idea of the 'ideal wife'. To add on, I am extremely opinionated and I don't give a damn about religion too.

Both of my 'almost relationships' weren't with local men. I admit, I like white guys. I like their mindset. I like that no stupid religious ideals are being shoved up my ass. I like to talk in English 24-7.

I am only holding myself off because I didn't want to be the stereotypical Sarong Party Girl. In the end, who am I kidding, I like white men. I can't deny it anymore.

Am I a Sarong Party Girl? Well, I don't dye my hair blonde, I don't have over tanned skin, I have my own money and I don't have frikkin' wet dreams of having a green card.

So... well... it's subjective really. I can say no, but people will disagree. I figure, if men can have preferences, women can too.

By the way, Happy New Year all.

I am maybe screwed up in many ways than one.

However, there are some things that I have made my peace with.

For an example, no matter how sad I am inside about what happened a few months ago, I believe I am able to bounce back, with a clear head. It is hard, but I do want to go over that hurdle and start afresh.

So talking with someone who thinks he had everything figured out and thinks that he had paid his dues enough to justify his next action was kind of disconcerting.

Disconcerting just because, he believes that being divorced and having a pension plan of 900 AUD a month that will be paid out for 4 months is enough. He is then going to take a flight to Manila and hump younger Filipino women who is maybe 30 years younger than him.

He is against materialistic women and thinks it is superficial. He also thinks that they have low esteem issues and that independent women has agendas.

I told him that what he has and actually wishes for, is a sadder existence than what I am right now.

"If you are against being superficial so much, then you won't be as picky. Just get with a fat ass and fuck a thousand times. I mean, you are a pot, calling the kettle black."

Please. I. Am. Not. Born. Fucking. Yesterday.

I ended the conversation with 'Whatever, do anything you think is right.' and walked away asking myself why the fuck is it that I keep on meeting these miserable fucktards. 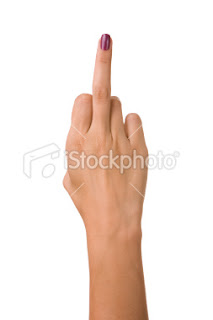 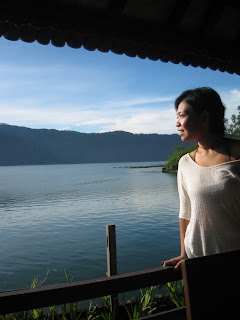 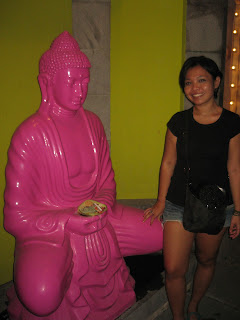 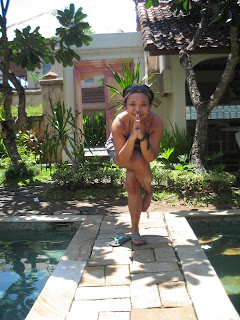 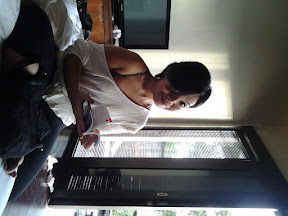 I have just decided that if I ever get to retire, I might retire in Bali.

Maybe somewhere in Ubud, where there are plenty of spiritually charged (somewhat pretentious) western yogis to mix around with.

The energy is different. Almost every house is a temple, and although they were really cashing out in tourism, the people still come across as genuine.

I was able to get out of the funk I was in a couple of days ago.

It was a good distraction.

Posted by Sarclover at 7:50 AM No comments:

I started this entry with no title in mind.

I told one of my best friends once that recently I feel that my life is empty.

Even with the travel plans to Bali happening next week, I still feel as if I am walking in the dark, reaching out to shadows of things and people that used to be there.

It's hard to excite me with anything nowadays.

I feel empty. There is a hole in my heart that can never be filled again.

I am not sure if it's because of what happened before this. I am not sure if I am feeling this way because I feel as if nothing I do will ever be enough. I am not even close to getting someone to share my life with, even if I want that person to be there without a future.

I even hid all those entries that never failed to pull me down.

I don't know if I can trust myself or other people I don't know who claimed to want to know and be with me.

How do you even start building all that with a stranger? I did that, twice. I failed, twice. Disappointed, oh thousands of times. I don't divulge these details to anyone because I don't want to be reminded of it because my God... it is just so tiring thinking about it.

I said to a close friend once that in 20 years, all I can see me be is dead, a seemingly strong woman with a broken heart. I cried twice today, and plastered a smile again  to get out of it.

I don't know if I am just depressed. Maybe I am. But maybe what I need is the realization that at least I loved and lost, which is better than to have never loved again, even if it is unrequited.

Just hoping that Bali can take this girl out of the dumps even if it's only for a couple of days.